The rumors of the death of PC gaming are ALWAYS greatly exaggerated.

It seems like someone is always proclaiming the death of PC gaming, be it a developer, a pundit, or just your friend who loves his Xbox. Whatever reasons they may cite, all of those people are wrong. PC gaming not only isn't dead, but it's experiencing a boom, as the 2016 numbers released by Jon Peddie Research show.

According to the JPR report, the "global PC Gaming Hardware market," which consists of "pre and DIY built gaming computers, upgrades, and accessories such as input devices and audio/communication systems," exceeded $30 billion in 2016, breaking that threshold for the first time ever. What was more interesting than the numbers was how the sales broke down, as you can see in this graph: 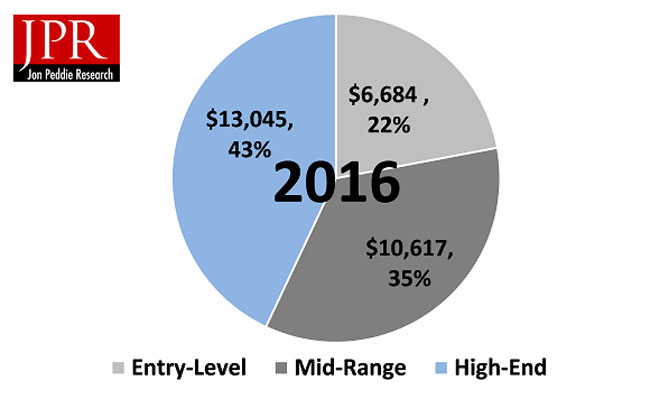 As you can see roughly $6.6 billion went to entry-level gaming PCs, $10.6 billion to mid-range PCs, and $13 billion to high-end PCs. That means that full 43 percent of the PC hard ware sales in the world are going to what this study calls "High-End" systems. Unsurprisingly, the article states that "The western appetite for PC gaming systems costing thousands of dollars is strong."

"Global consumers continue to embrace the PC platform for video games due to multiple factors. The desktop ergonomic is popular because the display distance offers increased detail when using HD and UHD monitors. Additionally there is superior control with mouse and keyboard control interfaces. This has been validated with eSports overwhelmingly being played on PCs. Additionally, product designers have given PC gamers thousands of options for complete customization from a functionally and aesthetic perspective," said Ted Pollak, Senior Game Industry Analyst for JPR.

This news won't be a surprise to anyone who follows the PC gaming market, but it's worth keeping in mind that despite what some might think, there's a lot of money to be made in the world of PC gaming.