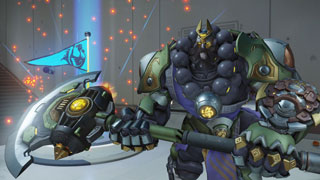 The new capture the flag mode that came to Overwatch during the Year of the Rooster event isn't a permanent addition.

Earlier this week, Blizzard kicked off the Year of the Rooster event, which included a new "Capture the Rooster" brawl that brought a Capture the Flag mode to the game. Some have been wondering how long that new mode will stay in the game, and Blizzard's Jeff Kaplan has answered that question, and also explained why it took so long to get a CTF mode in the game in the first place.

Kaplan explains in the video below that CTF was discussed for a while, and that at one point it was even given up on, because the team felt that the rules necessary to make it fair would "no longer make Overwatch heroes feel like Overwatch heroes." There are some small tweaks to the classic CTF formula in the Capture the Rooster mode, chief among them the delay in picking up the flag. This is to prevent characters like Tracer from blinking in, grabbing the flag, and then recalling to get out.

Blizzard plans to leave the new mode in Arcade during the event, but there are no current plans to add it to Competitive or Quick Play. Kaplan says it could possibly become a part of arcade permanently, but that would require some work. "Maybe, you know, someday, if we fine-tune and iterate on it, it will be great and we'll think about it that way. But we're not even remotely thinking about it that way right now."

The Year of the Rooster event is live now, and runs through February 13.