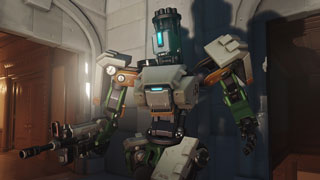 If you think that Overwatch's Bastion needs a few buffs, it sounds like you'll want to check out the next PTR update.

It seems like there's always an Overwatch character that could use a little adjustment. Those adjustments pop up on the Public Test Realm (PTR), and get tweaked before they go live in the game. Last week, it sounded like the next character in line for a buff was bastion, as Overwatch principal designer Geoff Goodman said in a forum post responding to a thread about fixing Bastion last week,

"I'm actually working on some changes for him right now. I'm not quite sure when these changes will hit the live game, we're still testing different things internally."

Yesterday, Goodman returned to that thread to detail some of the changes that are coming to Bastion in the next PTR. They include, in Goodman's words,

"Recon Mode - Lowered spread and increased magazine size, to help with general viability in this mode.

Sentry Mode - We're looking at focusing this mode into more of a tank-buster and barrier-buster mode, while also making it feel less suicidal to be transformed. To that end we're testing stuff like increased spread and removing headshots, but taking less damage while transformed.

Self-Repair - We've been testing a few big changes to this that are feeling really good so far. Currently our internal build has Bastion able to use Self-Repair while moving and also having it no longer interrupted when taking damage. To balance that out it is now on a resource system (similar to the route D.Va's defense matrix went). These changes have turned this ability from a more niche rarely used ability, to a much more powerful and core survivability tool."

Goodman points out that the dev team is still testing and tweaking these changes, and that what ultimately hits the PTR could be somewhat different, but these are the ideas in play at this time. There's also no word on when the PTR will go live, other than the ever popular "fairly soon."

Blizzard tends to tweak Overwatch characters fairly regularly, so it's no surprise to see them eyeing Bastion for changes. Think buffing Bastion is crazy, or just right? Tell us why in the forums!