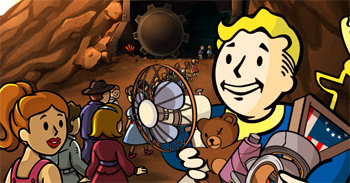 Fallout Shelter will be available on Xbox One and Windows 10 on February 7.

Bethesda Softwork's Sims-esque vault simulator Fallout Shelter is making its way to the Xbox One and Windows 10 platforms. The game, which was originally released for android and iOS back in 2015 was eventually ported and released for PC last year. The XB1/W10 version will be available on February 7, as a free download.

As the game will be a "play anywhere" title, player progress is retained across both Xbox One and Windows 10, meaning users can switch seamlessly between platforms and pick up where they left off, bringing all their saves, progress, and Achievements with them. The game has also been fully adapted to work with the Xbox One controller.

Since the game's original launch, it has continued to expand and add features, including Crafting, Scrapping, Pets, additional rooms, iconic Fallout 4 characters, and special Dweller customization options. The latest update was released earlier today and allows players to turn their vault dwellers into secret agents.