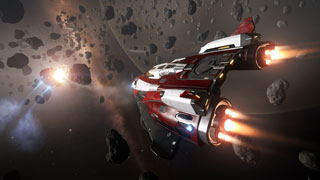 The studio behind Elite: Dangerous and Planet Coaster has a new game on the way, and it's based on an "enduring movie franchise of global renown."

Frontier Developments has been on a bit of a run of late. The studio's first game, Elite: Dangerous, has been praised by critics and fans alike for its open world space exploration. Its second title, Planet Coaster, has been similarly successful in the theme park simulation genre. Now, Frontier is about to announce a third franchise, and it's based on a Hollywood movie.

According to a press release posted on the London Stock Exchange website, the company has licensed the rights to an "enduring movie franchise of global renown" from an unnamed Hollywood studio. The company offered no further details on what the game might be, and said only that more information will be released later this year.

Frontier Developments Chief Executive David Braben is quoted in the release as saying, "The third franchise is an important next step in our growth. We have chosen to license this particular IP to work with as our third franchise, because we believe we can create something very special. It is creatively stimulating, already has a high worldwide profile, and is a perfect match for our expertise."

So, what in the world is Frontier working on now? Is there a major movie franchise that doesn't already have a game that needs one? If you think you know, tell us in the forums!