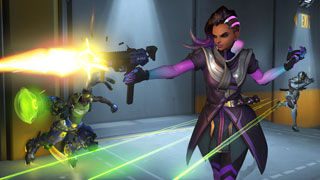 If you're using a mouse and keyboard to play Overwatch on console, Blizzard isn't happy about it.

Playing shooters with a keyboard and mouse isn't only for the PC these days. Not only are there hardware solutions like the XiM4, Sony actually has an officially licensed keyboard and mouse controller made by Hori. But if you're using one of those options to play Overwatch, Blizzard isn't all that happy about it.

Openly and easily support mouse and keyboard for ALL players."

Finally, Kaplan asks the players reading the thread to help out by reaching out "to the hardware manufacturers and express your concerns (but please do so in a productive and respectful way)."

Of course, this isn't really all that relevant to PS4, which, as we mentioned above, already offers a keyboard and mouse option that's available to everyone. That said, native support for any keyboard you have lying around would be even better. Maybe an interface to map keyboard keys to controller functions, almost like an inverse of what Steam has done with mapping controllers to the keyboard.

It's unlikely we'll see any action from either console company on these units, especially Sony, as they have an officially licensed product. It's equally unlikely that Blizzard will take any sort of action, as it has to conform to the console standards set by both manufacturers for their games. If nothing changes, you can bet there people will continue to use them to gain the obvious advantage.