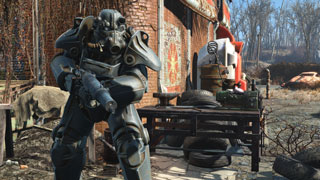 Bethesda has released an official high-resolution texture pack for the PC version of Fallout 4, and you can download it for free.

Bethesda has rolled out a high-resolution update for Fallout 4, as it said last week that it was going to. The pack is a whopping 58 GB in size, so if hard drive space is at a premium for you, you may want to give this one a pass.

Here's the official description of the pack:

"Experience the wasteland like you've never seen it before with the Fallout 4 High-Resolution Texture Pack! From the blasted buildings of Lexington to the shores of Boston Harbor and beyond, every location is enhanced with ultra-deluxe detail."

There's a similar pack headed to the PS4 version of the game that will be added as PS4 Pro support. It's supposed to land this week as well, but Bethesda has yet to announce just when that will be.

If you're still playing Fallout 4, you can grab the new high-res texture pack for free on Steam.