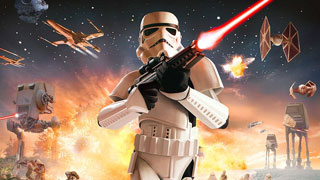 If you're looking to round out your Star Wars game collection, you should probably check out the newest Humble Bundle.

There have been plenty of Star Wars games released over the years, and plenty of them have been good. If you haven't played games like Knights of the Old Republic or Empire at War, the newest Humble Bundle may have a few things will catch your eye.

The Star Wars Humble Bundle III offers up four tiers of games and other goodies for fans of the franchise.

On the first tier ($1 or more), you can find all of these games:

The second tier requires you to beat the average price (currently $8.78), and adds these games:

The third tier will add five more games if you pay $14 or more:

Finally, the $35 tier will add a spiffy X-Wing vs. TIE Fighter T-shirt.

As usual, you've got about two weeks to get in on the deal. There's no indication that any other games will be added to the deal along the way, but you never know what might happen. If you want to grab the bundle, head over to the Humble website.