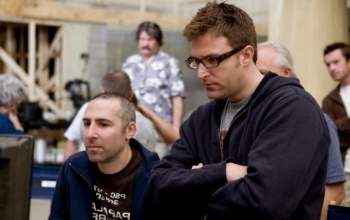 Mel Brooks is rolling over in his bed. Just his bed. He's still alive.

Jason Friedberg and Aaron Seltzer have made some of the worst movies we've seen this century. They only make spoof movies - ones that lack wit, creativity, and any semblance of intelligence. If you've seen Epic Movie, Meet the Spartans, Disaster Movie, or Vampires Suck, you have a good idea of what I'm talking about. If you haven't, don't. Don't even think about it. They're not even funny in a so-bad-they're-good way. You can't rip them apart with friends. They're just brain-numbingly terrible.

So, of course, they made a lot of money.

It's actually been a couple of years since we've seen Friedberg and Seltzer - their last three movies have gone to the VOD market, and a Taken spoof has been in the works for a while but hasn't come to fruition. Now, their next project has been revealed: a Star Wars spoof, which has been titled (not kidding): Star Worlds Episode XXXIVE=MC2: The Force Awakens The Last Jedi Who Went Rogue.

Presumably, this new movie will use the new Star Wars movies as a base - we already did Spaceballs, after all, and they probably want to avoid as many comparisons to that as possible. After all, they don't have Mel Brooks' talent.

If there's one movie I know I'm not looking forward to seeing, it's this one.