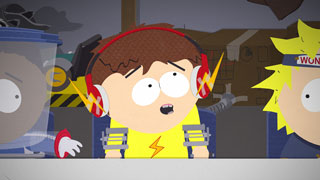 Ubisoft has pushed back South Park: The Fractured But Whole again, moving its launch date into the next fiscal year.

If you can't wait for South Park: The Fractured But Whole, there's disappointing news from Ubisoft today. During its earnings report today, Ubisoft pushed the upcoming game back into its next fiscal year (2017-18). That means that the earliest we'll see the game in stores will be April 1. The game was previously delayed from its original December 2016 back in September.

Ubisoft CEO Yves Guillemot said in the call that the reason for the delay is that Ubisoft is collaborating with another company on development, which has slowed down the process.

Ubisoft's fiscal year runs from April 1 to March 31, so the newest South Park game could be anywhere from two months to over a year away. While it would be nice to see it launch in April, you'd expect Ubi to be more forthcoming on a date if it was that close to being ready.