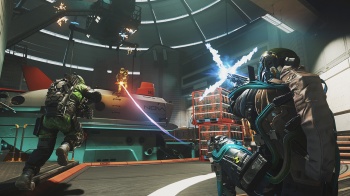 In a financial earnings call, Activision admitted that Infinite Warfare didn't resonate well with its fans, and plans to take Call of Duty "back to its roots".

It's no secret that Infinite Warfare wasn't exactly the most well-received Call of Duty title of late, a fact that Activision has somewhat admitted in its forth quarter 2016 earnings call. Activision chief operating officer Thomas Tippl said that Infinite Warfare underperformed on the publisher's expectations, noting that "it's clear that for a portion of our audience, the space setting just didn't resonate," and plans on taking the franchise "back to its roots" for 2017.

Long-time fans of the series will know that Call of Duty started its life as a World War 2 shooter, so it looks like we're heading back into the trenches. "Traditional combat will once again take center stage in this year's entry," continued Tippl. This year's entry is being developed by Advanced Warfare developer Sledgehammer games, and though it may seem like its a reaction to Infinite Warfare, Sledgehammer's game was greenlit years ago as part of Activision's three-year Call of Duty slate.

Despite lukewarm fan and critical reception, Infinite Warfare was still the number one selling game in the US last year, beating out long-time rival Battlefield, which decided to shift things up with a change in setting to World War 1.