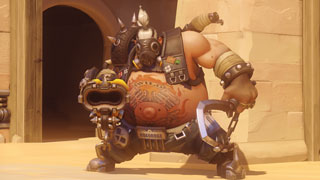 Blizzard has rolled out a new patch to the Overwatch Public Test Realm, and it brings changes to Roadhog and Winston.

Blizzard is constantly tweaking the heroes in Overwatch, in an attempt to keep them balanced and in line with each other. Before those changes go into the live game, they get tested out on the Public Test Realm (PTR). Once the company sees how the changes play, they usually end up in the live version of the game. Today, there's a brand new patch to test on the PTR, and it's bringing a bit of a nerf to Roadhog, and a bit of a buff to Winston. The changes were announced in a forum post from Overwatch principal designer Geoff Goodman.

For Roadhog, it's a bit of a further nerf to his Chain Hook. Targets will now be pulled to a spot 3.5 meters away from Roadhog, instead of 2 meters as it has been. The cooldown of Chain Hook has also been increased from six to eight. The changes come a little over a month after the hook got some previous nerfs. Roadhog's Scrap Gun is also getting altered, with its spread being decreased by 20 percent. Of course, there's no mention of the damage per projectile going down, so it might be more deadly to those caught in its blast.

For Winston, it's actually a bit of a buff, as his incoming critical hit volume has been dropped by 15 percent. Goodman said of this change, "Winston's head hit volume was just abnormally big, making him take more damage than he otherwise should. This change brings it more in line with other heroes."

These changes are now live on the PTR, so you can go check them out to see how they play.