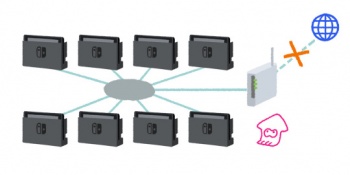 You'll be able to link up to eight Nintendo Switch systems together in a wired LAN set-up to play Splatoon 2 offline.

In a move that is sure to please eSports enthusiasts, Nintendo has announced that its upcoming Nintendo Switch shooter: Splatoon 2, will feature a fully offline wired LAN mode. In a post on the official Splatoon blog site Nintendo stated that you'll be able to hook up to eight Switch systems together and play without the use of the net.

"Previously, we've reported that Splatoon 2 will allow up to eight Nintendo Switch systems to connect via local wireless to play Private Battles. In addition to this, a new feature called LAN Play will enable players to connect eight docked systems using a wired LAN setup. This feature allows players to create local Private Battle tournaments without the need for an Internet connection," read the post.

Additionally, it looks like the game will come with a fully-fledged spectator mode. "If you're willing to put in the work to set up LAN Play, you can also use the Private Battle Spectator View feature by hooking up two additional Nintendo Switch systems. Local wireless play is perfect for your regular gaming get-togethers, but LAN Play is where it's at when you want to organize a serious tournament event with your fellow players," it continued.

Looks like Nintendo is really serious about Splatoon becoming a proper eSport.