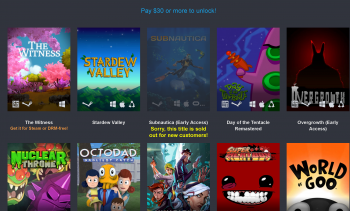 The Humble Freedom Bundle contains almost 50 books and games, including Stardew Valley and The Witness, for just $30.

The Humble Freedom Bundle is raising money for Doctors Without Borders, the International Rescue Committee, and civil liberties groups the ACLU - most notable for fighting against President Donald Trump's recent temporary travel ban. In just a single day, the bundle, which contains almost 50 books and games for a mere $30, raised an incredible $3.5 million for those charities.

"This special one-week bundle features over $600 in incredible games and books for just $30. 100% of your payments will go to the American Civil Liberties Union, the International Rescue Committee, and Doctors Without Borders/M?decins Sans Fronti?res (MSF). Humble Bundle will proudly match your contributions up to $300,000," wrote the organizers on its website.

"We chose these three organizations because of the inspiring work they do in providing humanitarian assistance to refugees and displaced people as well as in defense of justice, human rights, and civil rights," it continued.

The games included in the Bundle are some pretty damn good ones as well, with titles like Stardew Valley, The Witness, The Stanley Parable and Super Meat Boy leading the charge.

"We humbly remember that the United States is a nation of immigrants, and we proudly stand with developers, authors, and charities that champion liberty and justice for all."