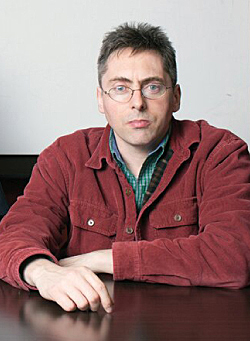 Erik Wolpaw is credited as one of the lead writers on the Half-Life, Portal and Left 4 Dead series.

Longstanding Valve employee Erik Wolpaw has left the company, Gamasutra reports. According to a Facebook post from Wolpaw, and a Twitter post from former co-worker Marc Laidlaw, the exact circumstances surrounding his departure are unknown. Wolpaw joined the company back in 2004 and he has writing credits on the majority of Valve's franchise, in particular the story-driven titles such as Portal 2 and Half-Life 2.

Wolpaw's resignation comes a little over a year after Laidlaw, also an influential Valve writer, revealed that he was leaving the company.

Wolpaw hasn't announced what he'll be working on yet, but Double Fine has credited him as a writer on its upcoming Psychonauts 2.

What does this mean for Valve? Well, if you haven't noticed, Valve has considerably distanced itself from story-driven singleplayer titles as of late. The last of these was Portal 2 all the way back in 2011. The company no longer has need of writers such as Laidlaw and Wolpaw, as it moves more and more towards a hat-based economy.

This also makes fate of Half-Life 3 even more bleaker than it already is.