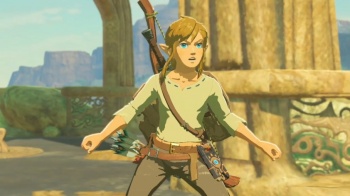 Nintendo says that the Breath of The Wild season pass content was only worked on after the main game's development wrapped up.

Last week, there was a fair bit of controversy surrounding The Legend of Zelda: Breath of The Wild's $20 DLC "season pass". Fans were upset that some features, such as hard mode, which had previously been included in Zelda games for free were now paid. Nintendo's Senior Product Marketing Manager Bill Trinen has gone on IGN to defend the practice, stating that development on the DLC only started after development of the main game had wrapped up, and it was only ever conceived as a way to bring more game to its fans post-launch.

"It was tough, because we actually had a lot of debate in terms of do we announce it, how do we announce it. I think one of the things that's unique about the way Nintendo develops games is when we're working on a game, and certainly just knowing the history of Nintendo games, you guys know that it's essentially we use every last minute to make the game as good as we possibly can, and really what that means is that the dev team was working on the main game, finished the main game, and as they're starting to get to the very end and wrap it up, really they said, 'You know we've made this massive world of Hyrule, we've spent a long time building it. It would be a waste to just make one game and have that be it,'" Trinen explained.

"We want people to be able to enjoy exploring this world, and so they started thinking about, 'Well, if we were going to do DLC, what would we do, how would we do it?' And you can see that in the fact that it's not... the DLC is not launching the day after the game or the week after. It's coming out several months later in the form of the first pack and then several months after that in the form of the second pack. And that's because the content is in development."

He said that he wished they had more information on the DLC to release when they announced it, saying that it would more than justify the price. He compared it to Mario Kart 8's DLC pack, which is simply an optional purchase for gamers who really love the franchise.