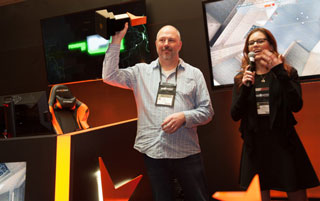 At this year's DICE Summit, 16 devs will face off in a Quake tournament, and you'll recognize many of the participants.

Each year, the DICE Summit brings a wide swath of people from the video game industry together in Las Vegas for a conference focused on the business side of the industry. It's also home to the annual Entertainment Software Association Interactive Achievement Awards. This year, it will also be home to something else: A 16-player, one-on-one, single-elimination Quake tournament featuring developers from around the industry.

This is actually the second year the tournament, which is sponsored by eSports community FaceIt, will be held. Last year's champion, Sean Dunn of Sparkypants, will be returning to defend his title, and he'll be joined by 15 other developers. The first round matchups look like this:

You'd expect Tim Willits to be the favorite with his id Software connections, but who knows how much time he's spent with Quake in recent years.

DICE takes place this weekend, and the tournament itself is scheduled to start at 1:50 PM ET on February 22. The quarter-finals, semi-finals and grand-finals will start February 23 at 2:05 PM ET.

You can find more information on the event, as well as the bracket for the tournament, over on FaceIt's official site. If you want to see the results from last year's tournament, you can find them here.