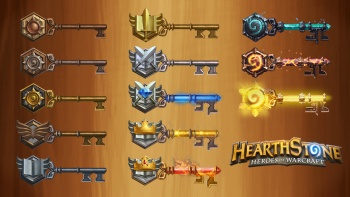 Hearthstone's arena mode is getting some huge changes in patch 7.1, including the shift from Wild to Standard.

As far as Hearthstone's game modes go, Arena is in a weird place. For an entry fee of 150 gold or two real-world dollerydoos, you choose a random hero, and build a deck out of randomly drafted cards. It's a fun take on the game, supposedly "evening" the playing field by having random decks, but as the game and card pool has grown, the chances of you having a deck filled with utter garbage while your opponent drafts seven Flamestrikes is pretty high. So, Blizzard has announced some pretty substantial changes to the format coming with patch 7.1 to try and shake things up.

First and most foremost, Arena will now be in the Standard format, instead of Wild. This means that you'll only see cards from the Classic set, and sets released in the last year. Blizzard had this to say on the change:

As more cards are added to the Arena pool, having each game feel meaningfully different actually becomes harder to accomplish. Many of the cool synergies between cards, such as Jade Golems or Mechs, live within each individual set release. Attempting to create decks that utilize these meaningful synergies in a wide and diluted card pool will become more and more difficult as the Wild card pool grows larger. Arena runs then becomes less about card synergies and smart deck choices and more about being fortunate enough to be presented with the best card from each set. This change should put the focus back on the player for good, synergistic Arena choices and make Arena decks feel more cohesive.

Secondly, some changes are coming to rarity distribution. "Common" quality cards currently make up 78% of all Arena decks, a number Blizzard thinks is too high. Following the patch, the number of Common and Basic cards that show up overall should be lower, giving more room for fun Rare, Epic, and Legendary cards to show up in an Arena run.

Additionally, the cards Abyssal Enforcer and Flamestrike will show up approximately 50% less in Arena. Rejoice!

The distribution of spells and minions will also be brought a bit closer together, meaning you should have a fairly even spread between the two types of cards in your deck.

Last, but certainly not least, "Classic" minions that are just vanilla stats with no text (like Bloodfen Raptor) will also show up a lot less.