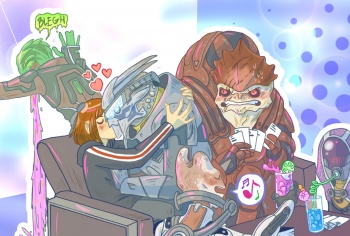 Planning on playing Mass Effect Andromeda on PC? This is what you'll need.

Thanks to a posting on Origin, we now know exactly how beefy of a PC you'll need to have sex with exotic blue space aliens in Mass Effect: Andromeda.

Here's the minimum and recommended specs:

The minimum specs are quite reasonable, but the recommended ones are quite beefy, asking for one of Nvidia's fancy new 10 series graphics cards and a core i7. You'll need a pretty decent chunk of hard disk space: 55 GB, but that's pretty standard these days. It's nothing compared to Call of Duty: Infinite Warfare's 130 GB.

In other news, BioWare has confirmed that the game has "gone gold," and is hard at work on a Day 1 patch, though it wouldn't tell us how big it will be.