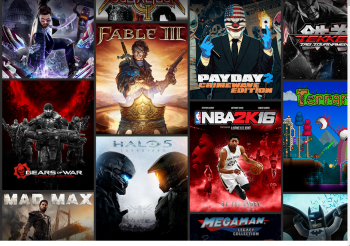 Game Pass functions like "Netflix but for games," giving you unlimited access to over 100 titles with one monthly subscription cost.

Original Story: "Wouldn't it be cool if they had something like Netflix but for video games?" many a gamer has pondered. Well, ponder no longer, as Microsoft has announced something called "Game Pass" which is exactly that - a subscription service that gives you unlimited access to a wide roster of titles.

Game Pass offers "unlimited access to over one hundred great Xbox One and Xbox 360 titles" as part of a monthly subscription of $9.99 per month. It's scheduled to launch "late Spring 2017" and will be available for both Xbox One and PC.

These aren't bargain basement titles as well, with Microsoft promising big hitters and recent releases like Halo 5: Guardians, Payday 2, NBA 2K16 and LEGO Batman. Additionally, it claims that new titles will be added every month, and if you really like a game that's in the Game Pass catalog, you can buy it for a 20% discount.

There is one major difference between Netflix and Game Pass and that's streaming. Unlike Netflix, which streams movies and TV shows to you in real time, Game Pass games can be downloaded to your device and enjoyed without any streaming or buffering issues. Better yet: you'll be able to play Game Pass games offline for up to 30 days, and there is no limit on how many games you can download.

If you have any more questions, be sure to check out Microsoft's FAQ.