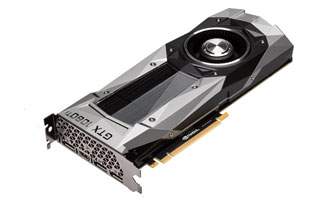 The much-anticipated Nvidia GTX 1080 Ti has been announced, along with an accompanying price cut to the existing GTX 1080.

Ever since Nvidia rolled out the GTX 1080, hardware enthusiasts have been waiting for the inevitable GTX 1080 Ti. Nvidia has ended their wait, announcing the new card at its event last night. The new card is impressive, offering Titan-X performance for just over half the price. The new card shares the GP102 GPU that the Titan X employed.

More importantly for gamers, Nvidia has said that the 1080 Ti will have plenty of overclocking headroom, and that you'll be able to get it up over 2 GHz. To help facilitate this, the Founders Edition incorporates a new vapor cooling chamber that provides twice the cooling area.

How much better than the GTX 1080 is this new card? Nvidia says on average the GTX 1080 Ti will be 35 percent faster than it predecessor, and in raw compute and memory bandwidth testing, the 1080 Ti actually outperforms the Titan X.

The new cards will initially all be Founders Editions, but soon there will be versions available from all the usual Nvidia partners, including ASUS, EVGA, Gigabyte, MSI, PNY, and others. That means you can expect to see plenty of variants, including custom cooling solutions, factory overclocks, and more.

Both the Founders Edition and the partners cards will share the same MSRP of $699, the same price point the GTX 1080 Founders Edition cards released at. There's even more good news: the GTX 1080 has had its price cut by $100, bringing it down to $499. This unexpectedly low price point does two things: It makes the cards very attractive to upgraders, and it sets a precedent for AMD's soo-to-be-announced Vega cards to try to meet.

If you're in the market for a high-end card that can kick ass at higher resolutions, the GTX 1080 Ti will definitely be worth your consideration. The cards will launch next week.