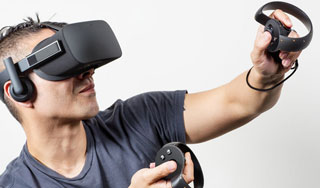 Oculus has lowered the financial barrier on its hardware with an across the board price cut.

If you've always wanted to check out the Oculus Rift, but were put off by the high cost of the hardware, the pricing just got a lot better. During the Epic Games keynote at GDC yesterday, Oculus made the announcement that it was cutting the price of its Rift headset, its Oculus Touch controllers, and bundles containing them.

The big announcement was the bundle with the Rift headset and the hand-tracking Touch controllers getting its price cut from $798 to $598. That's a big cut, and the prices of the individual components have been cut as well. The Rift headset itself is down to $499, a cut of $100. A pair of Touch controllers is down to $99, also a $100 price cut. If the two sensors that the bundle packs in aren't enough, extra sensors got a $20 price cut, down to to $59.

Oculus co-founder Brendan Iribe said on stage that the company decided to drop the price thanks to "great volume" from the hardware. He followed up by saying, "From the beginning, our goal has been to get the best VR into as many hands as possible. Lowering the barrier of entry and making it more affordable for everyone to enter the world of VR is part of that goal."

With the price of PC components dropping on a regular basis, these price cuts to the Oculus hardware mean that the barrier to entry is lower than ever. That said, $598 for an Oculus bundle is still far from an impulse buy. It's also $99 higher than the price of the PlayStation VR Bundle.

Despite that, lowering the price of VR is key to expanding its adoption. Now if they can just figure out how make you look less ridiculous while playing games on the thing.