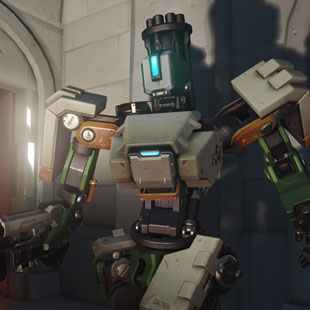 Update: Well that was fast. The Bastion nerf is now live, and reduces the damage reduction Bastion receives from his Ironclad passive from 35% to 20%.

Original Story: The latest Overwatch patch brought some substantial buffs to Bastion, and a lot of players are not happy about it. In Quick Play and competitive, not only has Bastion joined the meta, but he dominates it, particularly when defending on control point maps. Even Overwatch's game director Jeff Kaplan thinks the little robot that could is a little too strong right now, and a new patch on the PTR has nerfed him a bit.

"Over the past few nights I've played with, as and against Bastion. My perception is that he is a little too powerful right now," he wrote in a forum post. "In particular, in one match I was playing Bastion and the enemy Tracer was trying to hunt me down. The Tracer player was clearly a better player than I am -- a very skilled individual. I relied heavily on my self-heal and the Tracer could not finish me off."

The PTR patch that just went live this morning has reduced Bastion's Ironclad passive (which reduces damage taken while in turret form) from 35% to 20%. This should make him a little bit more vulnerable, and allow flankers like Tracer and Reaper to actually be able to take him down.

Kaplan also talked a little about the actual "meta" versus what people perceive as the meta. "The perceived meta is largely driven off of the professional scene and what gets played in tournaments," he explained. "One thing that I found interesting was that there was a perception based on those reports and in the community that Mercy is never played. Yet according to our stats back during the '3 tank meta' when 'Lucio and Ana were the only viable healers', Mercy was the 5th most played hero OVERALL -- and yes, I am talking about in Competitive Play, not Quick Play."

What are your thoughts on the current Overwatch meta? Personally, I think it's still much too tank heavy, and while changes to Mercy have made her more viable, I'd still rather have a Lucio, Ana or even Zenyatta over her.