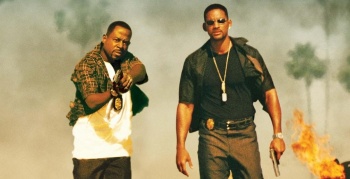 Whatcha gonna do when they don't trust you?

One of the more interesting sequels that has been in the planning stages for a while has been Bad Boys 3, which is supposedly going to be titled Bad Boys for Life, because the studio apparently doesn't want to save that title for a potential fourth installment for some reason ("Bad Boys 4 Life").

One of the main reasons that it was intriguing was because of the director who was attached: Joe Carnahan, not Michael Bay - who directed the previous two installments. Well, The Hollywood Reporter is now reporting that Carnahan has dropped out of the project.

Carnahan has reportedly departed for one of two reasons, depending on the source asked: a scheduling conflict or creative differences. The latter of those two is more concerning to prospective audiences, as it usually means the studio wouldn't allow the director to do what he or she wanted - which means the movie is likely to turn out safer and blander.

If you're unfamiliar, Carnahan previously directed Smokin' Aces, The A-Team reboot, The Grey, Narc, and Stretch. He's also the latest person to take a crack at the Uncharted movie's screenplay.

Bad Boys for Life is currently scheduled for a November 8, 2018 release date, which means a new director needs to be found soon. Carnahan also worked on the most recent draft of the script, which means that, if a "creative differences" were the main reasons for Carnahan's departure, chances are a script rewrite with a different writer is likely to occur as well. Both Will Smith and Martin Lawrence are scheduled to reprise their roles.

Of course, the studio could always relent and give Carnahan the control he wanted, much like Warner Bros. did with Matt Reeves.

Update: Carnahan has responded to the report on Twitter:

So, there you have it. According to him, it's just a scheduling conflict. He and Frank Grillo are working on their production company, WarParty.