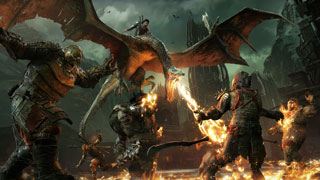 The first gameplay footage for Middle-Earth: Shadow of War has arrived, showing off the expanded Nemesis System.

The gameplay video released today runs just over 16 minutes, and features alpha footage combined with voice-over narration to show off many of the upcoming game's new systems.

As you can see, the Nemesis system has been expanded, allowing not only for more nuanced enemies and allies, but extending to customizable fortresses that take on the characteristics of their leaders. As before, enemies can be subverted, dominated or dispatched at your whim. You can ride drakes, call armored wargs, and even find yourself owing your life to that orc sniper you recruited to your army. You can also end up facing off with that orc you recruited and left for dead three major battles back.

The combat system looks just as nice as it did in Shadow of Mordor, with what look to be some new wraith-inspired moves added in. Plus, there appears to be an added focus on some of the game's RPG elements, with loot, armor, and more customization available.

There's doubtless much more information to come, but for now, it looks as though Middle-Earth: Shadow of War is on track to be a worthwhile successor to Shadow of Mordor.