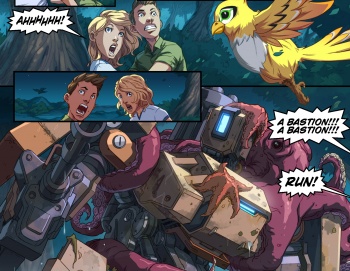 Last week, Blizzard promised that it would step things up with the Overwatch lore. Indeed, the last time we saw a piece of "behind the scenes" lore was the infamous Christmas comic that outed Tracer as gay. True to its word, today a brand new comic staring Torbjorn and Bastion has been released for free.

Binary takes place in rural Sweden just after the titular Overwatch has been disbanded. Locals spot a rogue Bastion unit (which turns out to be the Bastion) roaming the woods, and enlist the help of Torbjorn to put an end to its "reign of terror". But, as Bastion's animated short showed us, he's not such a bad dude, and the pair end up forging a friendship together.

You can read the comic for free online, or download and print it as a .PDF if you'd prefer. Binary was written by Blizzard's Matt Burns and James Waugh, and illustrated by Joe Ng and Espen Grundetjern.