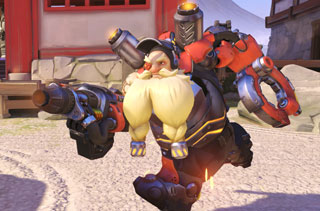 Some Overwatch players are abusing custom games to gain XP while AFK, and Blizzard isn't happy about it.

Recently, Blizzard added the ability to share your Overwatch custom games with anyone using the new server browser, and more importantly, the ability to earn XP in those games. Unfortunately, as often happens, a few people are abusing the feature and trying to ruin it for the rest of us. What are they doing? Well, they're setting up Skirmish matches that they could AFK in and still get XP.

Overwatch game director Jeff Kaplan is making it crystal clear that Blizzard does not approve of this practice. In a forum post yesterday, Kaplan said that when Blizzard introduced the new system, it "knew that there was the potential for this system to be exploited, but we wanted to give everyone the benefit of the doubt before becoming overly restrictive with the system." Of course, now that players have exploited it, Blizzard is taking steps to prevent it. Kaplan wrote,

"As some of you have noticed, Skirmish in Custom Game no longer rewards experience. Also, the AFK timer is now in place in Skirmish mode (in Custom Game only). This change is rolling out over a 24 hour period and should be live in all regions by the end of today."

That's not all. Blizzard is also starting to take disciplinary actions against the people abusing the feature. What sort of actions? Well, anyone who participates in this sort of exploit risks having their account banned. Kaplan wrote,

Kaplan also said that this is just the first step in an escalation plan to deal with the issue. The final step of that plan will be the removal of experience gain in custom games. Kaplan says that he doesn't want to get to that point, though. To that end, he asks the community to assist in stopping the behavior. "Do not create Custom Games with the intent of gaining experience while inactive. Don't join those games. Don't jokingly put those names in your own Custom Games. And report players who are abusing the system."

While it's certainly not the first time that players have abused a system and caused it to be tweaked or removed, it's still disappointing. On behalf of Overwatch players everywhere, cut it out.