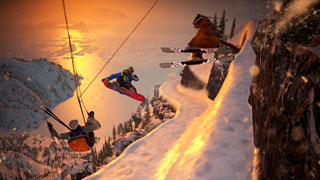 You can get your winter sports fix in a Steep free weekend starting tomorrow.

If you've ever envisioned yourself flying a wingsuit down the side of a mountain, or or pulling off sweet snowboarding tricks, then Ubisoft's upcoming free weekend is for you. Starting tomorrow, you can play Steep for free on PC, PS4, and Xbox One.

If you enjoy the game and want to keep playing, you'll be able to buy it at a discount and keep the progress you made during the free weekend. Both console Standard Editions will be 50 percent off, and the Gold Edition, which includes the Season Pass, will be 40 percent off. Those discounts end March 13 on Xbox One, and March 20 on PS4. PC players on Uplay will be able to get either version for 50 percent off until March 14.