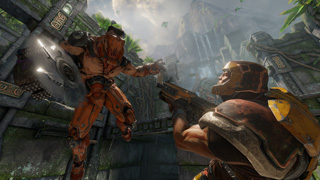 Free-to-play players will only have access to Quake Champion's Ranger champion.

Bethesda Softwork has finally revealed the business model for Quake Champions, its upcoming Quake reboot. In an interview with Polygon, creative director Tim Willits reveals that the game will be fully free-to-play, but will also include a paid option. No mention of the dreaded microtransactions were had.

Essentially, free-to-play players will have access to all of Quake Champion's maps and modes, but only the Ranger champion. They can pay a one-off fee to permanently unlock all other champions, but Willits said there would also be in-game ways to get new champions. Think Smite and its founder's pack.

"But then we also understand that we want to get as many people into the game as possible, especially outside of North America and Western Europe, where we have a massive fan base. So we want to have the flexibility to have a free-to-play option for those people."

Free-to-play players will earn "favor" - the game's in-game currency - and use it to temporarily unlock new champions. "I don't want to use the word rent," Willits said of the system. "You do spend favor to have access to them for a limited amount of time, yes. But you don't spend any real money on it."