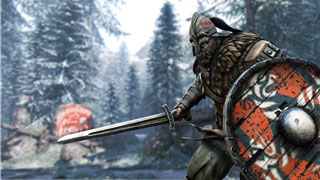 Ubisoft has promised to ban AFK farmers in For Honor, and yesterday it announced that 1,500 players have been banned, with 4,00 more receiving warnings.

If you've played any For Honor multiplayer, you may have seen someone farming for rewards while AFK. This can be done by a variety of methods, ranging from complicated third party programs to simply wrapping a rubber band around your controller's analog sticks. Earlier this month, Ubisoft warned that it would be taking action against players found to be employing any of these methods. Yesterday, it announced the first wave of bans and warnings.

Around 1,500 players were hit with three-day bans, and an additional 4,000 or so new AFK farmers were detected and sent warnings. Ubisoft posted the announcement in the For Honor subreddit. If you've been carrying on with some AFK farming (for shame!) and you want to know if you're affected, Ubi said that "In all cases, impacted players will receive an official email detailing their sanction and the reason behind it."

Ubisoft also pointed out in the post that, "Using a cheat engine to exploit AFK farming is against our Code of Conduct, and these impacted players may get a permaban for cheating."

For Honor released on Valentine's Day, and its upcoming DLC heroes have already leaked.