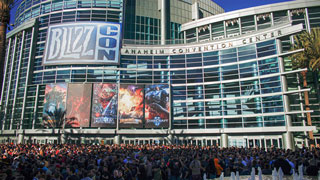 Blizzard has announced the dates, location, and most importantly, ticket sale information for BlizzCon 2017.

If you'e a hardcore Blizzard fan, you've probably either made the trip to BlizzCon, or wish you could. If you're interested in attending this year's edition of Blizzard's convention, the dates and ticket sale information are now available.

BlizzCon 2017 will be held at the Anaheim Convention Center on November 3 and 4. In an official statement, Blizzard CEO Mike Morhaime said, "BlizzCon will be here again before we know it, and we're looking forward to catching up with the community, taking in the awesome eSports action, and showing everyone what we've been working on."

A ticket will include a badge for BlizzCon, a Virtual Ticket to watch the show digitally, and of course, the much-coveted BlizzCon Goody Bag. We'll have to wait and see what's included in that bag, but typically the version handed out at the show will contain physical and digital goodies for all of Blizzard's games. If you can't make it to the show in person, you'll also be able to pick up the Virtual Ticket on its own, but it's not available yet.

Finally, on April 12, tickets will go on sale for the annual BlizzCon Benefit Dinner, which is held the night before BlizzCon - this year, it's November 2. A $750 ticket will get you in the door, and you'll get to have dinner drinks, and some social time with "Blizzard developers and community representatives." All the net proceeds from this dinner benefit the Children's Hospital of Orange County. If you're interested, you can check out Blizzard's Charity Ticket page for more information.

If past years are any indication, BlizzCon tickets will sell out in mere minutes, so if you want to go, you should start exercising your clicking finger now. You can find more information on the show on the Official BlizzCon website.