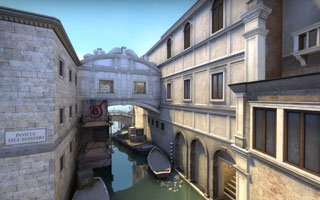 There's a brand-new map for Counter-Strike: Global Offensive that appears to be based on Venice, Italy.

Last year, there were rumors that Valve might be adding something to Counter-Strike: Global Offensive after dataminers found some references to "canals" in the game files. Fast forward to today, and Valve has announced just what that addition is: a brand-new map named "Canals."

The official post on the CS:GO blog says that the map is based on "real-world environments" in a "historic Italian city." The counter-terrorist side is a large, open area, and the terrorist side is a crescent-shaped area with multiple route to take to each bomb site.

Valve says of the bomb sites, "Site A is set in the open CT territory and rewards the use of smoke grenades as well as rifle skills, while site B is located in the interior where submachine guns and shotguns will prove most useful."

Alongside this new map, there's also a new upgrade to the Phoenix Terrorist player model, as well a new case. The Spectrum Case will contain 17 weapon finishes designed by community members. The rare special items in these cases be the "second generation of knives in Chroma finishes."