Disclaimer: The designer of Adventurer Conqueror King is Escapist co-founder and current General Manager Alex Macris. The co-designer is former Escapist EIC Greg Tito. Josh Vanderwall, Erik Jacobson, and numerous other current and former staff members were playtesters of ACKS. It's hard to imagine something we could be less objective about, really. 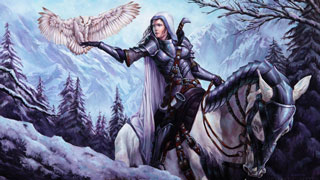 With its seventh Kickstarter, Autarch looks to add the Heroic Fantasy Handbook and the Barbarian Conquerors of Kanahu sourcebooks to its Adventurer Conquer King System.

If you've ever played a tabletop RPG and wished you had a few more customization options, then Adventurer Conqueror King might be just what you're looking for. The system was created to offer more customization and flexibility, as well as high-level domain-level play. Now, the company has launched its seventh Kickstarter in the hopes of adding two new sourcebooks to the game's offerings: the Heroic Fantasy Handbook and the Barbarian Conquerors of Kanahu Setting Sourcebook. Both are written for ACKS, but can easily be adapted for use in other RPGs as well.

The Heroic Fantasy Handbook will bring a number of new mechanics, including a new Eldritch Magic system, ceremonial magic, spellslinging, and over 155 new spells. There are also new rules for heroic adventuring, 10 new character classes, and more.

Barbarian Conquerors of Kanahu is based on barbarian fantasy, and includes, according to the Kickstarter page, "new monsters, magical items, technology, spells, classes, and variant rules, all packaged together in Kanahu, a dangerous world of pulp fantasy. Kanahu draws on the myths of the Ancient Near East and pre-Colombian Mesoamerica and blends them together into a gonzo milieu with dinosaurs, Cthulhoid creatures, giant insects, crazy sorcerers, muscled barbarians, city-states, alien visitors, and super-scientific technology." The book includes 15 new character classes, 45 new monsters, a catalog of "super-scientific technology," a gazeteer of Kanahu, and more.

The Kickstarter page lists pledge tiers as low as $10 for both books in PDF form, all the way up to a $1,000 tier that lets you collaborate on the design of a gadget, a legendary magic item, and a custom character class.

If you want in, you can find all the info you need over on Autarch's Kickstarter page.