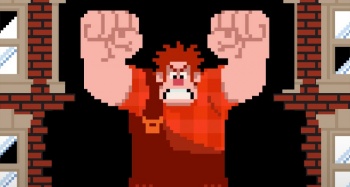 The Wreck-It Ralph sequel we've been eagerly anticipating finally has a title.

Often regarded as one of the best movies about video games, Wreck-It Ralph was released in 2012 to strong reviews, glowing audience reports, and more than enough money to justify making a sequel. Last summer, it was announced that the sequel would be coming out in 2018 and, thanks to an announcement by Disney at this year's Cinemacon, we now know what its title will be.

The new film will be called Ralph Breaks the Internet, and will focus on Ralph (voice of John C. Reilly) as he ventures away from the arcade he calls home and heads out into cyberspace after gaining access to a WiFi router.

Rich Moore, director of the original film, is back for the sequel, as is screenwriter Phil Johnston (who will co-direct this time around). Reilly, Sarah Silverman, Jane Lynch, and Jack McBrayer are all set to reprise their roles.

Ralph Breaks the Internet is scheduled to hit theaters on March 9, 2018.