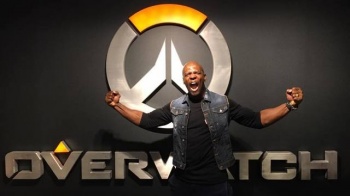 You won't have to wait too much longer for the next Overwatch hero.

Overwatch's latest hero, Orisa only arrived last month, but it looks like we won't have to wait too much longer for the next one. In an interview with IB Times, game director Jeff Kaplan said that the next hero is very far along in development, and will release sooner than you may think.

"We know what that hero, what the abilities are and how they interact, so we're at that point. The heroes past that hero are more in prototype, exploration phase but the next hero we're pretty set on."

Blizzard has teased an Overwatch announcement for next week, which could very much be the reveal of the new hero.

When Orisa was first teased, fans speculated that it would be Doomfist - a prominent character in Overwatch lore. This theory was further fuled by comments from actor Terry Crews, asking fans if they'd like to see him voice Doomfist.

Could hero number 25 finally be the Terry Crews-voiced Doomfist we deserve? One can only hope!