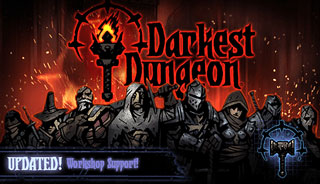 Red Hook has opened up much of the game for madding, allowing changes to "hero classes, monsters, items, dungeons, and core game rules such as torchlight modifiers and XP rewards." The Workshop already features a number of mods, ranging from new classes to AI improvements. There's even a complete overhaul of the game, titled "Pitch Black Dungeon," that says it is designed to, "enhance and expand upon the vanilla game for those seeking a more tactical, balanced, and challenging experience."

To celebrate both the release of Workshop support and the fact that Darkest Dungeon has now sold 1.25 million units worldwide, Red Hook is offering the game for 50 percent off on Steam this weekend. The company will also be streaming some featured mods on its Twitch channel tomorrow, April 7, at 5 PM ET.

You can find Darkest Dungeon on Steam, and you can check out all the Workshop content available so far on its Steam workshop page. You can read more about the this update over on the game's official site.