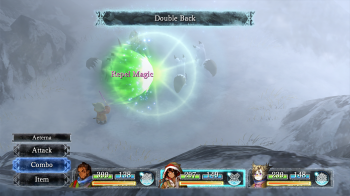 Square Enix says it will support the new system as much as possible through both original titles and ports.

Speaking with Japanese business newspaper the Nikkei (via Press A to Join), video game publisher and developer Square Enix vowed to fully support the Nintendo Switch, which is enjoying a good degree of success in Japan.

"In addition to developing new titles, we also want to port what we can do with existing game titles more and more," Square-Enix COO Yosuke Matsuda.

"Nintendo proposes various kinds of fun. There may be other companies offering amazing ways of playing with 'Switching' characteristics of
'Switch'. However, since we have our way of doing things, we will make games that we are good at leveraging the functions of Switch," he continued.

A port of JRPG I am Setsuna is already available for the Nintendo Switch, and a new franchise, Octopath Traveller, is currently in the works. In Japan, the Switch also has ports of Dragon Quest Heroes I & II, and an upcoming Seiken Densetsu Collection.

Either way you can expect to see plenty of Square titles on the Switch in the near future.

Source: The Nikkei (Japanese) via Press A 2 Join