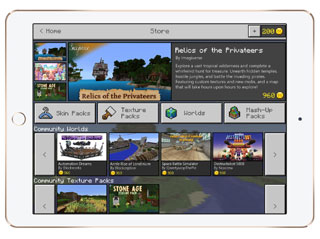 Editor's Note: An earlier version of this story mistakenly referred to the new Marketplace as being for "paid mods." This was inaccurate, and has been corrected. We apologize for the error.

Microsoft is bringing user content to the Windows 10 and mobile versions of Minecraft, and the creators are getting a cut.

The newest versions of Minecraft, the ones found on Windows 10 and mobile devices, are about to get a new Marketplace for user-generated content for Adventure maps. On this new in-game store, approved creators will be able to sell world, texture packs, and skin packs that are part of an adventure map.

Purchases will be made using Minecraft Coins, a new virtual currency that Microsoft is introducing. These Coins will be purchased with real money, and MS has shared some of the Coin package prices:

The Marketplace is kicking off with nine approved creators that should be familiar to Minecraft fans: Noxcrew, BlockWorks, Qwertyuiop The Pie, Blockception, Sphax, Eneija Silverleaf, Imagiverse, Polymaps and Razzleberry Fox. If you'd like to submit your own work to the Marketplace you can, but you have be a registered business to do so. You can find more information about selling your creations on the store here.

You will have to have an account on Xbox Live to purchase content, and Microsoft says that it is "working toward making content players buy available on multiple devices as well," using that account. Of course, you can still use community content that isn't part of the store for free, just like always.

There will be a public beta on Android later this month, but it will be focused on testing coins, and there won't be any actual content for sale. The Marketplace is planned to launch later this Spring. If you'd like to learn more about the Marketplace, or ask a question, there's a Reddit AMA planned for Thursday, April 20 from 12PM - 3PM ET.