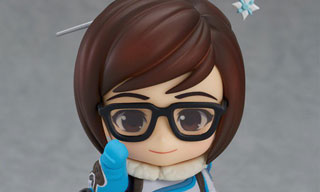 If you're a fan of Overwatch's Mei, you can now pre-order her Nendoroid figure.

Collectors of Overwatch paraphernalia, your wallets are in danger again. Blizzard has posted the Nendoroid Mei figure, and you can pre-order it now.

First revealed at the New York Toy Fair in February, the figure includes a second faceplate that shows her in super happy mode, and you could even swap it out with one of Tracer's faceplates, if you happen to have that figure as well. You'll also get attachable "effect parts" that give Mei's blaster the appearance of firing, as well as a "circular effect sheet" that represents her Blizzard ability.

Even Mei's deone, Snowball, is included. You can detach the drone and display it on its own stand.

The Mei Nendoroid is available for pre-order now, and will run you $49.99. You can find it on the Blizzard Gear Store. The figures are expected to ship by the end of Q4 2017.