The third Ghost Recon Wildlands title update not only fixes bugs, it adds Live Challenges to the game that update weekly.

If you've run into some bugs as you take on the Santa Blanca Cartel in the wilds of Bolivia, the new Ghost Recon Wildlands update may be a welcome one. Released on console yesterday and PC this morning, "Title Update 3" sets its sights on improving game stability and fixing bugs. The stuck XP bar issue has been addressed, and there have been tweaks to the radio messages between your team members to "improve the narrative content delivery." 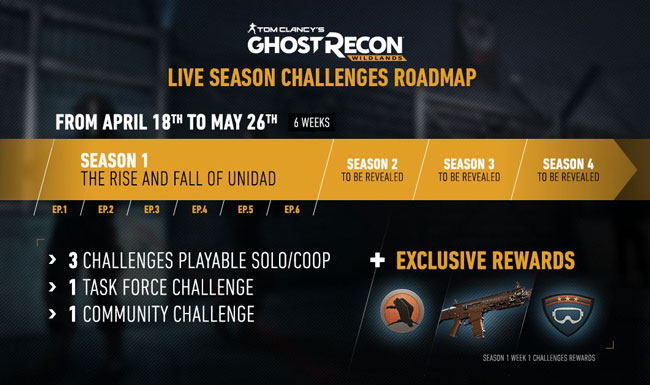 As for new content, this update is also bringing in "Live Season Challenges." This new addition will offer up new content in the form of five new missions each week, all tied into a six-week-long season that will have a specific theme. The first season is titled "The Rise and Fall of Unidad."

Each week will consist of these missions:

All of these challenges are live content, so you must be online to activate them. You can complete them offline in the same session, though.

Ubisoft says that you'll receive "a reward after completing each challenge, totalling (sic) three rewards per season." Each challenge will only be available for the week it's posted, and will be updated every Wednesday at 5 AM EDT. If you don't complete them in time, you'll miss out on the reward.

You can find more information on Live Challenges, as well as the complete patch notes, over in this post on the UbiBlog.