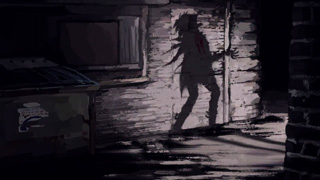 The new game Bandai Namco teased with the "Prepare to Dine" tagline isn't a Souls game, but an action-RPG from the God Eater team.

Last week, Bandi Namco rolled out a new teaser with the tagline, "Prepare to Dine." That phrase caught the interest of the Souls community for obvious reasons, but it turns out that it's a new vampire game from the team behind God Eater.

Titled Code Vein, the new game was revealed in the latest issue of Weekly Famitsu. It's described as an "exploration action-RPG" set in the the future, and puts players into the role of vampires called Revenants in a society called "Vein." The Revenants have "transcended humanity," losing their human memories, but gaining supernatural abilities.

You'll be able to bring along a partner as you play thanks to the game's "buddy system," but it's not clear if your buddy will be an AI partner or a co-op player. Gameplay will involve exploring outdoor areas and dungeons, while fighting off enemies using melee weapons like swords, spears, and hammers.

When a Revenant runs low on blood, it turns into a monster called a Lost. You'll be hunting the Lost, and draining any remaining blood using a piece of equipment called a Blood Veil. This blood can be used to power special attacks, make the player stronger, or weaken enemies.

The official announcement of the game is expected in a couple of days, so we should have more information soon. For now, we simply know that it's planned to release worldwide in 2018, with the platforms yet to be announced.