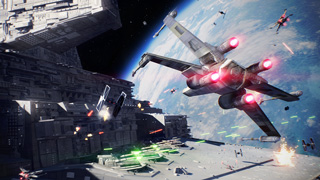 Origin Access members will get to play Star Wars: Battlefront II over a week before it launches, and EA is showing off pre-order bonuses as well.

Just like most EA games, Star Wars: Battlefront II will show up on Origin Access before it hits store shelves. For those of you who pay the $5 a month or $30 a year for EA's premium service, you'll be able to play the newest Battlefront game on November 9.

The announcement came in a post on the game's pre-order website. In the same post, you can also find the pre-order bonuses for the game. Pre-order the Standard Edition ($59.99), and you'll get all of this:

If you pony up the extra $20 for the "Elite Trooper Deluxe Edition," you get the three bonuses from the Standard Edition, as well as all this:

There's no word yet on what limits will be placed on the Early Access period, but as the previous Battlefront title in 2015 and Mass Effect: Andromeda both had their early play limited to 10 hours, it's likely we'll see similar restrictions this time around.

Star Wars: Battlefront II launches on PC, PS4, and Xbox One on November 17.