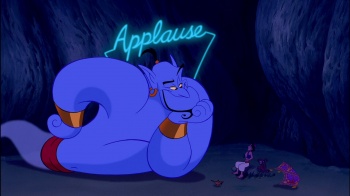 If he ends up taking the role of Genie, Will Smith has some pretty big shoes to fill...

Live-action remakes of classic animated Disney movies is the latest tactic for the studio to desperately to re-package your childhood, and Arabian adventure Aladdin is next in line to get the treatment. It's still in the very early stages of pre-production at the moment, but Deadline is reporting that actor Will Smith is currently "in talks" to play the role of Genie.

Now before you get your hopes up (or down), this isn't the first time Smith has been "in talks" about a Disney movie. He had previously been in talks with Tim Burton about Dumbo, but nothing materialized out of that.

The live-action remake of Aladdin is being helmed by Guy Ritchie, best known for Snatch and the Sherlock Holmes films, with his big-budget fantasy movie King Arthur: Legend of the Sword hitting theaters in May.

The original role of Genie was of course played by Robin Williams, who sadly took his own life in 2014.