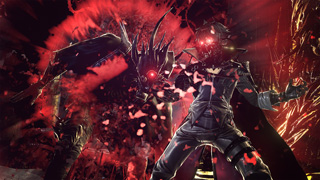 Code Vein is now officially announced, and Bandai Namco has shared a bunch of new screenshots showing off the game.

Last week, Bandai Namco was teasing a new game with the tagline "Prepare to Dine." Earlier this week, the news leaked that the new game was called Code Vein, and that it cast players as vampires called Revenants. Now the company has officially announced Code Vein, and passed along a bunch of screenshots that show off a first look at we can expect from the game.

In the press release accompanying the announcement, Eric Hartness, Vice President of Marketing for Bandai Namco Entertainment America Inc. said of the new game, "Code Vein provides a fresh anime aesthetic and blood-curdling gameplay twists to the popular 3rd-person action RPG genre. The talented development team at Bandai Namco Studios is creating a tightly crafted experience filled with plenty of challenge that our fans crave along with a smart and engaging story that is sure to draw players deeper into the world of Code Vein. Let the feast begin!"

There's still no word on when we might actually see Code Vein, or when it might release, beyond a vague statement in the press release that says "release on major home consoles in 2018." We reached out to Bandai Namco to see if there are any plans for a PC release, and its representative told us that for now, the company is just saying "major home consoles" for now. We'll keep on the news, and if there's any mention of a PC release, we'll let you know.

Here are all the new screenshots for your perusal.