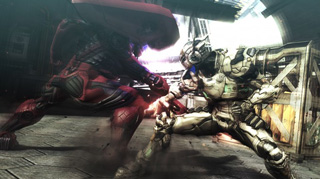 A tiny update to the PC version of Bayonetta could be teasing another PC release - specifically, Vanquish.

If you own the PC version of Bayonette, you may have notivced that the game received a very tiny update today - 22 KB, to be exact. If you haven't figured out what was included in that update, let us help you out. It added a small file to Bayonetta's extras folder. That file has gotten plenty of attention from fans of another one of Platinum Games' titles: Vanquish.

The file in question is nothing more than a new avatar that features Sam Gideon, the protagonist of Vanquish. For those of you that don't remember the 2010 third-person shooter, it was only released on PS3 and Xbox 360, despite clamors from fans for a PC version. The game was directed by Shinji Mikami, best known for working on Resident Evil and Devil May Cry, and was a critical success on release.

Platinum and Sega (who published Vanquish) are both staying quiet about what this avatar means, but if it truly is a teaser for a PC version of the original Vanquish, we should hear more from both companies soon enough.