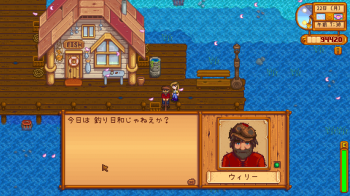 Stardew Valley has just received its 1.2 update, and while it doesn't contain the multiplayer that players have been very patiently waiting for, it does have some good news for non-native English speakers.

The highlight of the patch is the localization of the game into six new languages: German, Spanish, Russian, Japanese, Simplified Chinese and Brazilian-Portuguese. There are also a number of improvements to controller mode, and some bug fixes. Here is the full list of notes:

Translations for German, Spanish, Brazilian Portuguese, Russian, Japanese and Simplified Chinese.
When using a controller, the cursor will snap between menu buttons by default. If you disable that, the cursor will instead accelerate while moving.
When using a controller, pressing the back button will skip events that are skippable.
Exit to Title has returned.
Fixed lighting shader not covering the whole screen on Mac and Linux.
Switching from "Windowed Borderless" to "Fullscreen" should now go straight to fullscreen instead of Windowed mode.
Wallpapers and floors no longer have a tile placement indicator showing a random object
Increased stability of preference-saving code. This should fix infrequent crashes that require the player to delete startup_preferences.
Fixed a crash that can happen when a pig tries to spawn a truffle but there's no space for it.
Fixed a couple of rare crashes that could have occurred at any time during the game.
Fixed a typo of the word 'pronounce' in the marriage event.
Fixed the player not getting the recipe for Cookies if they skip Evelyn's event.
Farming level now affects crop yield prior to level 10

The patch is currently only live for PC.