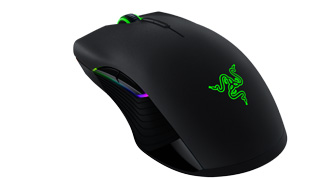 If you're a fan of cutting-edge PC peripherals, you may want to keep an eye on Razer's newest wireless mouse, the Lancehead. Designed to entice professional gamers into going wireless, the Lancehead employs an all-new proprietary wireless technology that Razers says makes it, "the world's most reliable, tournament-grade wireless gaming mouse."

Razer calls this new tech "Adaptive Frequency Technology," and explains that the Lancehead scans the frequencies within the 2.4 GHz band and chooses the one that it the strangest and most interference free. It can also hop frequencies on the fly as needed.

The Lancehead uses the same Razer Mechanical Mouse Switches as the Deathadder Elite, which means your buttons are rated for up to 50 million clicks. The mouse's 5G laser sensor offers true 16,000 DPI, 210 inches-per-second tracking and 50 G acceleration.

Lancehead is also powered by Razer's new Synapse Pro software, which is currently in beta testing. Anyone who purchases a Lancehead is invited to the exclusive beta. The software will include a unified configurator that will let you save your setting to the mouse and cloud simultaneously. That means your settings will carry over to any PC, even without an internet connection.

If wirless isn't your thing, there's a wired edition of the mouse as well, called the Razer Lancehead Tournament Edition. That version features an optical sensor at true 16,000 DPI and a tracking speed of 450 inches-per-second.

Both versions of the Lancehead incorporate Razer's Chroma technology, so no matter which you choose, you customize your mouse color however you see fit.

Science and Tech: The Cheapest PC I Would Build: August 2014 Devin Connors 41 Comments
Comments on