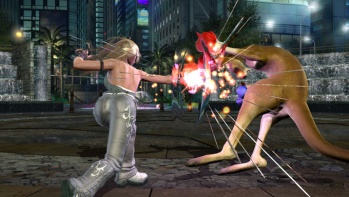 Roger Jr., the boxing kangaroo, has been cut from the console versions of Tekken 7 due to fear of animal activist protests.

Remember that viral video earlier in the year of a man rescuing his dog from a kangaroo by punching it in the face? Well, while hilarious for us, it's been a headache for the folks over at Bandai Namco, who are cutting Tekken 7's boxing kangaroo: Roger Jr., as a result.

"There was a video of a man's dog being headlocked by a kangaroo, and he punched it in the face", executive producer Katsuhiro Harada said in an interview with VG24/7. "It turned into a big problem. People were complaining about him punching a kangaroo. It seems that in the last few years there's a lot more animal activists - even though they probably wouldn't play our game they would still hear about that, about a kangaroo in our game being punched, and would complain about it."

While Roger Jr. is still currently in the arcade versions of Tekken 7 playable in Japan right now, when the console and PC versions of the game launch on June 2 this year, he will be cut.

Meanwhile, Kuma the bear, will remain in the game because a bear is "obviously stronger than a human being".