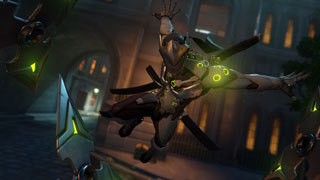 If you're a fan of Genji, Hanzo, or Reaper in overwatch, you might enjoy the buffs they're getting on the PTR.

Overwatch characters are constantly under scrutiny from Blizzard. The company watches for signs that a certain character may be under- or over-powered, and sometimes, those characters get adjusted. Those adjustments usually get tested on the game's Public Test Region, or PTR.

Blizzard released the patch notes for the newest round of testing yesterday, and they reveal that we can expect to see some buffs to Genji, Hanzo, and Reaper, as well as some slight nerfs to Soldier: 76 and Reinhardt. Orisa is also getting tweaked, but the net effect is mostly neutral.

First up, Genji and Hanzo have both had the cooldown on their attacks after wall climbing removed, meaning they can attack "immediately after completing a climb." Hanzo also gets a 10 percent increase to the charge speed of his bow, and he can maintain the charge while climbing, as long as you don't release the button.

Reaper is getting a bit of a buff to his Wraith Form, as his ammo will be entirely refilled whenever he uses the ability. Blizzard says that this is intended to give him "a fighting chance" if an enemy chases him down after using Wraith Form to escape.

Orisa is having the cooldown on her Protective Barrier reduced from 12 seconds to 8 seconds, which Blizzard says "helps her reposition the barrier more easily when needed." To compensate for this buff, she's had her Fusion Driver damage reduced by 15%.

Reinhardt is getting a bit of a nerf, with the effective height of Earthshatter reduced from three meters to two meters. Earthshatter can now only climb objects that are two meters high, which Blizz says makes the ability "less likely to climb tall objects as it "crawls" along the ground."

Finally, Soldier 76 is having the bullet damage from his Heavy Assault Rifle reduced from 20 to 19. Blizzard says they made this change because "his damage output was making him a must pick, compared to similar roles."

This PTR patch also features a number of bug fixes. You can see the complete patch notes over on the official Overwatch site.