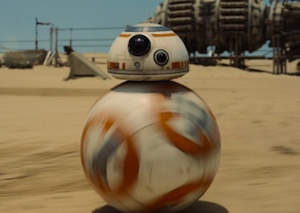 At the end of The Force Awakens, Rey goes off to find Luke Skywalker, accompanied by R2D2. If you thought it was strange that good ol' artoo came with her, and not BB-8, who had been her companion throughout the film, that's because The Last Jedi director Rian Johnson specifically requested it.

"The big [favor] was, I asked if R2 could come with Rey, and if BB-8 could stay behind with the Resistance," Johnson told Entertainment Weekly. "Originally, it was BB-8 who went with Rey, which makes sense for the story in a way. But I asked, 'Can you do me this solid and switch the droids?'"

Johnson said that Luke's story is essential to the plot of The Last Jedi, and as R2D2 has been such a huge part of Luke's life, it seems his presence is equally essential.

"Figuring out where his head was at was the very first thing I had to do when writing the movie," Johnson said. "I had to crack this. And it had to be something for me that first and foremost made sense. Why did Luke Skywalker go off to this island? That was the starting point, and that's what the entire movie explores."